WPForms Review: Is It The Best WordPress Form Plugin? Find out… 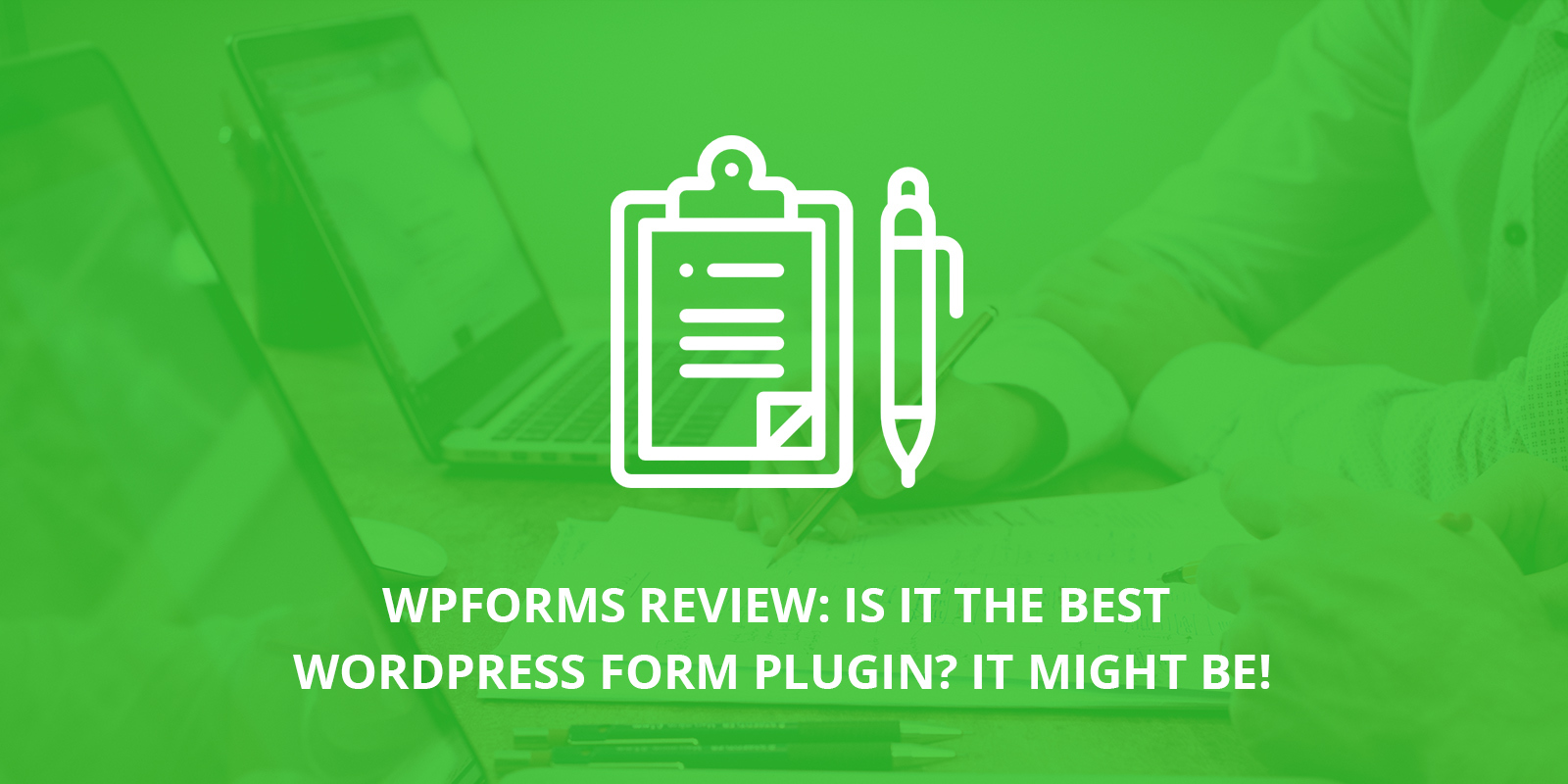 Looking for the perfect contact form plugin for your WordPress site? In this post, I’ll share my hands-on WPForms review to help you decide whether or not it’s the right tool for your website.

In general, I think WPForms has one of the best form builder interfaces that you’ll find. And with the premium version, you can create pretty much any type of contact form, with plenty of other helpful functionality – like a Zapier integration.

To help you get a good feel for the plugin, here’s how I’m going to divide my WPForms review:

WPForms Review: What Does This Plugin Do?

The free version makes a great option for basic forms – like a contact form or feedback form, while the premium version lets you get into more advanced uses like:

Both versions use a beginner-friendly drag-and-drop form builder to help you create your forms. The main differences are just in:

To kick off the hands-on part of this WPForms review, I’ll first show you how that builder works using the free version at WordPress.org. Then I’ll install the premium version and highlight some of its features, as well as some pros and cons of WPForms.

Again – for this part of our WPforms review, I’m using the free version of WPForms that’s located at WordPress.org.

When you first install WPForms, it will hit you with this nice onboarding video:

Ok – that doesn’t do anything for functionality – but I always appreciate when a plugin developer takes a little time to develop an onboarding process. It makes it a lot easier to get up and running, especially if you’re a casual user.

Building Your Form with WPForms

Once you’re up to speed with how WPForms works, you can click that big orange Create Your First Form button to get started.

While you can always build a form from scratch, WPForms gives you templates for popular forms that you might want to create to save time:

Once you choose your starting point, WPForms will launch you into the drag and drop editor.

In the free version, you can build your forms using any of those Standard Fields. WPForms will also tease you with Fancy Fields – but those are only available in the paid version:

To add a new field to your form, you just drag it over:

Similarly, you can also use drag and drop to rearrange the order of fields in your form:

Then, to edit a specific field, you just need to click on it to open the field options:

Here, you can configure how each field functions, like:

Once you’ve finished using the form builder to lay out and configure the form fields that you want to include, you can hop over to the Settings tab to configure some global settings, as well as what happens once a user fills out your form.

One nice thing you can do in the General tab is enable/disable the anti-spam honeypot. A honeypot is a neat anti-spam trick that manages to catch most automated form-filling bots without inconveniencing human visitors. For that reason, it’s a way better option than a traditional CAPTCHA (WPForms does support both reCAPTCHA and Invisible reCAPTCHA, as well).

I’ve been using just the honeypot field on my personal site and I’ve never had any issues with spam.

In the Notifications tab, you get to set up the email notification that you receive when a user submits the form (you can also see form submissions in your WordPress dashboard with the premium version).

The nice thing here is that you can choose whether to include all fields, or just specific fields. And you also get these Smart Tags that let you include other information – like the page on which a user actually filled out the form:

And if you hop over to the Confirmation tab, you can configure the message that a user sees immediately after filling out the form:

That pretty much covers how the free version works! In general, it’s one of the more intuitive interfaces you’ll come across. I’d put it up there with Ninja Forms as having the most beginner-friendly form interface, and it’s certainly much more beginner-friendly than something like Contact Form 7.

Now, let’s explore some of the features that you get with the premium version.

Ok, now it’s time to put the premium version to the test in this part of my WPForms review. I won’t rehash any of the basic stuff because, again, the core form builder functionality is identical.

Instead, I’ll go through and highlight some of the cool stuff you can do with the Pro version.

To start with, you get more templates to reflect the various add-ons that you have. For example, you can quickly spin up a Billing / Order Form using the template:

And now, you can use all those Fancy Fields and Payment Fields. This is where things start getting cool because you can do stuff like:

You can also use conditional logic to show only certain fields based on how users fill out other form fields, which lets you get more creative with your forms:

This gets pretty cool because you can do stuff like:

Automation is great because it saves you time – and WPForms makes it pretty easy.

Beyond that, you also get to use the Marketing and Payments tabs to:

Ok, hopefully, my WPForms review gave you a good feel for the WPForms interface. Now, I want to single out some of the specific features that I think you’ll like about WPForms in comparison to the many other form plugins.

I mentioned this earlier in this WPForms review, but WPForms has one of the best drag-and-drop form builders that I’ve used. The only other plugin that I’d put up with it is Ninja Forms.

The drag-and-drop system, combined with the pre-built templates, make it so that anyone – even a total beginner – should be able to create forms in no time.

2. Build Forms For Anything

If you are willing to pay for it, WPForms has that same sort of Swiss Army Knife approach that people love with Gravity Forms (though developers still might want to stick with Gravity Forms because of its popularity and extensibility).

Want to create a payment form? Yup – it can do that.

Need to create an email opt-in? Yup – check on that, too.

Basically, if what you want to do involves form fields…WPForms can probably do it.

Of course, all of this only applies to the paid version.

Like I mentioned above, I’ve used WPForms on my personal portfolio site for about two years now and have never had any issues with spam – and that’s only using the included honeypot feature.

Form spam is a real issue on the Internet, so not having to worry about it and being able to avoid inconveniencing legitimate users is great.

Ok, conditional logic itself isn’t an especially unique feature in form plugins. But what I do love is the conditional logic for the notification emails. I think that offers up a lot of neat workflows that can save you time and help you stay better organized.

5. The Zapier Integration Opens Up Even More Automation

I didn’t really get a chance to talk about this in the hands-on section of the WPForms review. But one of the coolest things WPForms lets you do is integrate with Zapier.

If you’re not familiar, Zapier is a tool that lets you connect web apps/software together. It sounds simple, but it’s actually incredibly powerful for setting up automated workflows.

Basically, you can use a WPForms submission to trigger an action in any of the 1,000+ apps that Zapier supports.

Examples would be to:

And that’s just scratching the surface of what the integration lets you do. Yeah…it’s pretty cool.

Is There Anything Bad About WPForms?

I don’t have any heavy criticisms for WPForms – in general, I think there’s a reason it’s active on over 3 million sites while still maintaining a 4.9-star rating on over 7,000 reviews at WordPress.org.

The one thing I would point to is the price.

First, depending on the features that you need, you might be able to find a free form plugin that can get the job done.

For example, if you just need conditional logic, Caldera Forms (another great form plugin) can actually do that for free. So in that case, you might save some money by skipping WPForms.

Similarly, while WPForms does have multiple pricing tiers, they don’t sell individual extensions like Ninja Forms or Caldera Forms.

For example, if all you really want is a Stripe integration, you’ll still need to pay for the $199 tier of WPForms, whereas you could just purchase the $49 Stripe add-on if you use Ninja Forms. Of course, paying $199 for WPForms also gets you a whole bunch of other helpful features – but that only matters if you’re going to use them.

If you’re on a tight budget, there might be ways to get the premium functionality that you need for a lower price depending on the exact features that are must-haves for you.

Final Thoughts for our WPForms review

Form plugins are one of those must-have WordPress plugins, which means that WordPress users are kind of spoiled for choice when it comes to quality form plugins. But there’s a reason that, despite that competitive landscape, WPForms has still managed to become active on over 1 million sites and maintain such a stellar rating.

The drag-and-drop form builder is great, and the depth of functionality you have available to you across the various premium plans is impressive.

If you just want a simple contact form or feedback form, the free version at WordPress.org is all you need.

But if you want to get into more advanced stuff like payment forms, post submission forms, etc., you’ll definitely need to go Pro.

Feature-wise, I don’t think anything should hold you back. Just remember that, depending on your specific needs, you might be able to save some money by looking at other form plugins that offer an extension payment model. I highly encourage you to check out this tutorial which shows you how to embed a Google Form on your WordPress website if you’re looking for a quick and free solution.